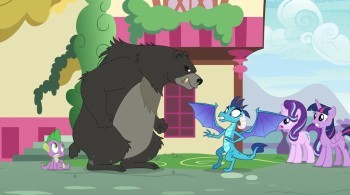 A Bear?! You made a bear!
"Is this another part of pony friendship? Telling each other what you learned all the time?"
— Ember
Written by Josh Hamilton
Advertisement:

As one of Spike's first acts as the new Friendship Ambassador to the Dragons, he has invited Dragon Lord Ember to Ponyville to get to know the way of ponies more, and the rest of the town is ready to help out by preparing for her arrival. Spike explains to Twilight Sparkle and Starlight Glimmer how important it is to appease dragons, so he wants to make sure he makes a good impression for her. However, just then, Changeling leader Thorax arrives, as Spike had invited him to come to Ponyville the same day. Spike starts panicking, fearing that Ember and Thorax will not get along and if they should meet, it will lead to war between the two species and potentially devastate all of Equestria.

As Ember is seen in the distance, Twilight offers to take Thorax to see her castle, allowing Spike and Starlight to greet Ember. Though happy to meet Spike again, she's also interested in meeting Twilight too (after mistaking Starlight for Twilight), and Spike is forced to take her to the castle, but keeps her from Thorax by offering her a friendship banquet. This gives Spike enough distraction to meet up with Twilight, who has also been trying to keep Thorax busy in the castle. Suddenly, Spike's scales start glowing, and to his and Twilight's surprise, the cutie map shows that Spike is being called to a friendship problem, right here in Ponyville. Twilight and Starlight agree to help to keep Ember and Thorax apart while Spike goes to try to figure out the problem.

While Spike struggles to find a friendship problem, separately Twilight and Starlight take Ember and Thorax back to town. Eventually, their paths all cross, and when Ember yells at Spike when asking him where he's been, Thorax takes that as a threat against his friend and transforms into a bear; Ember similarly seems Thorax's change as a threat and also vows to protect Spike. They realize they both care for Spike, and then recognize what Spike has been doing for the last few hours, and they separately fly off in anger over Spike and his actions, leading Spike to think he's started the war he envisioned.

At a lake near town, Ember spots Thorax contemplating. The two start talking and they both learn they are struggling under their new roles as leaders of their species. Thorax has a rogue changeling group that wants to feed off others and has difficulty controlling them, and Ember's rule makes her think other dragons cower in fear. They offer each other advice: Thorax should be more assertive, while Ember needs to consider the feelings of others more, and they both realize they can apply these to Spike. Back in town, they approach Spike and tell him that what he did was wrong, but they forgive him since their own meeting has helped them greatly. As Thorax takes them into a group hug, Spike's scales start glowing again, and Starlight surmises that he solved the friendship problem — the one that he actually created for himself. Later, Spike announces that today serves to honor both the ponies' ties with the dragons and changelings, as the celebrations resume.