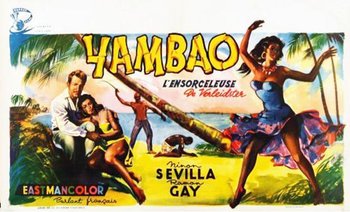 Yambao (also known as Cry of the Bewitched) is a 1957 Cuban-Mexican film. On a Cuban sugar plantation in 1850, the master and his wife are expecting a child. Trouble arrives in the form of Yambao, the daughter of a witch who was killed fifteen years earlier. Her presence causes unrest among the slaves, who blame her for an outbreak of plague. Later she uses magic to seduce the master himself.