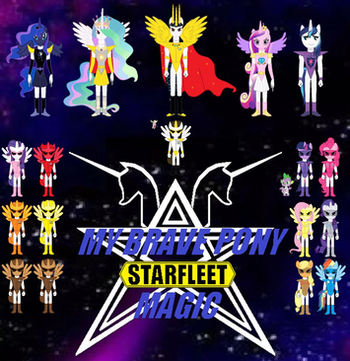 "FIM is a BIG MISTAKE to me... its horrible... so I guess an alternate universe is in order!"
—Dakari-King Mykan, on the original My Little Unicorn: Magic is Believing
Advertisement:

My Brave Pony: Starfleet Magic is a series of fanfics based on My Little Pony: Friendship Is Magic, originally started in 2012 with a heavy emphasis on Original Characters written by Dakari-King Mykan.

The series began after Mykan watched several episodes of Friendship Is Magic and quickly decided he hated it for various reasons, not the least of which was the message of friendship.

Enter his personal Alternate Continuity, in which Starfleet, a team of Winged Unicorns, led by main character Lightning Dawn, must save the land of Unicornicopia from various monsters, while learning about the power of believing (what they are supposed to believe in is stated just once: themselves) from the king of Unicornicopia, The Grand Ruler (a three-horned Alicorn). Initially only having subtle references to its source material, by the end of Season 1 the Friendship is Magic cast was folded into the story, with the Mane 6 joining Starfleet as a secondary unit. The power of believing theme that permeated the original season also gradually went away, turning the series into a straight action story with Monsters of the Week, and a rotating cast of villains.

, Mykan later reworked the story IN SPACE as My Brave Pony: Starfleet Magic. The series is treated as if it were a TV show, with each fanfic being called a "season" and each chapter an "episode". So far, there have been ten "seasons":

There are also a couple of fics that cross over with Mykan's other fics, the first of which takes place before the Space Ponies came to Equestria:

There's a small What If? fic:

And finally, there are three Death Battles:

Due to the many questions he gets in regards to this series, Mykan has created a Q&A

where anyone can inquire. Do make sure your questions haven't been already answered before posting them.

There at least two "tributes" to his story that serve as deconstructions of his work: Fall of Starfleet, Rebirth of Friendship and My Brave Pony: Starfleet Nemesis, as well as two Alternative Continuities titled Starfleet Redone and Starfleet: Magic is Believing. There is also another deconstruction, in Stormwolf Adventures, but there it's only a part of the plot.