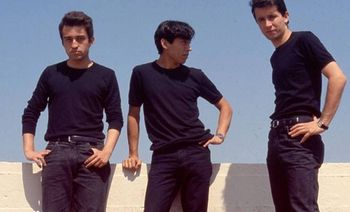 Los Prisioneros ("The Prisoners" in Spanish) was a Chilean rock band between 1979 and 1992, considered by many as the most influent rock band of Chile and in general of Latin America in The '80s, being the parallel of Soda Stereo in Argentina during the same time. The band was formed by Jorge González (bass and lead vocals), Claudio Narea (guitar and backing vocals) and Miguel Tapia (drums and backing vocals), the three met during High School and they wanted to make a band and to be famous as The Beatles.

After various possible formations and names, in College they finally formed "Los Prisioneros" and started with their first album La Voz De Los 80s, which got a mild success, but wasn't until their second album Pateando Piedras where they got real success. During the 80s, Los Prisioneros released 3 albums, which got Double (and even Triple) Platinum Level in selling discs, having high sells not just in Chile, but in other countries as Peru, where the band still has a lot of fans. Also, the song "We Are Sudamerican Rockers" was the first music video ever transmitted by the Latin America version of MTV.

At the end of the 80s, after various internal problems and rivalries between the members, mostly González with Narea, the latter abandoned the group and the rest of Los Prisioneros recruited 2 new members: Robert Rodriguez (guitar) and Claudia Aguayo (keyboard) and released Corazones album in 1990, but the group didn't last too much and disbanded in 1992. After this breakup, every member made solo careers and projects, being Jorge González's solo career the most famous of them.

In 1996, Los Prisioneros reunited again for the release of Ni Por La Razón Ni Por La Fuerza, which was a huge success of selling discs and revived the fame they already gained in the 80s. Later in 2001 they reunited for real for a couple of revival concerts and for the 2003 version of Festival Internacional de la Canción de Viña del Marnote Viña del Mar International Song Festival

. After these concerts and other appearances, the group recorded Los Prisioneros in 2003 and Manzana in 2004. But the old rivalries and differences between the members continued and finally Los Prisioners disbanded for real in 2006.

The influence of Los Prisioneros in Chile is huge and is considered as the inspiration of many groups since The '80s when they were a Fountain of Expies, even today. And not just by Rock groups, also various artists from genres like Hip-Hop, Pop, Reggae, Punk and Electronic Music admit that Los Prisioneros were their influence, was which already seen in Tributo a Los Prisioneros in 2000. Even the group got various Documentaries and Biopics not just made in Chile.