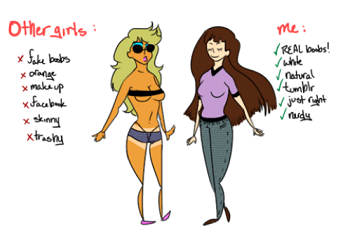 The picture that started it all.
Advertisement:

Creamsicle is an internet meme that began life on tumblr in May 2012, and spawned an enormous fandom literally overnight. It started off when tumblr user beekkake made a drawing poking fun at stereotypes about girls who use tumblr and Facebook. Another user made Fan Art of the two girls kissing, which led to numerous jokes about Shipping them together, with the Idiosyncratic Ship Name of "Creamsicle". Less than a week later, there were hundreds of fanfics, art, comics, and even Filk Songs based on Creamsicle, as well as Spin-Off characters. Most of this stuff can be found here

The two characters are referred to as Snowflake and Sunglasses or Normal-chan and Other Girl-sempai (or simply Normal and Other).