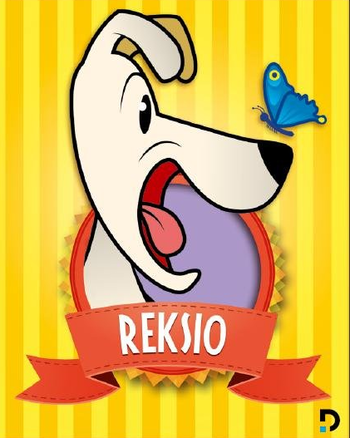 Reksio is a Polish character from the TV animated series by the same title. Reksio was created by a Polish director Lechosław Marszałek. The cartoon featuring this character was made in years 1967-1990 by Studio Filmów Rysunkowych in Bielsko-Biała. All episodes describe adventures of a friendly, piebald dog named Reksio, with his animal friends - hens, cats, other dogs and their owners. Almost each episode lasted about 10 minutes (with exception to episode Reksio remontuje ("Reksio renovates") which lasted almost 12 minutes).

This cartoon has been adapted into books (which were published by Wydawnictwo PIK and later by Papilon Publicat (previously Wydawnictwo Posiedlik-Raniowski i Spółka).) and the PC games made and published by Aidem Media, which have a reputation of being absurdly hard for kids' game.