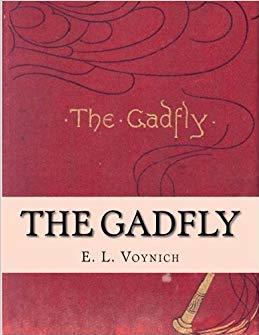 The Gadfly is a historical fiction novel written by the Irish author Ethel Voynich in the year 1897.

The Gadfly is set in the pre-unification Italian statelets during the early to mid 19th century, a time when the region was dominated by their northern neighbor, Austria. Featuring the young and naive Arthur Burton, a priest in training under his mentor, "Padre" Montanelli, the book delves into the protagonist's attempts to discredit the Papal States and their influence.

Arthur diverted from the Christian faith early on in his life due to Montanelli's unintentional betrayal of him, resulting in the protagonist fleeing from Italy to South America in order to escape his struggles. A decade later, Arthur returns to his homeland under the pseudonym 'Gadfly' and joins a revolutionary movement by helping to create propaganda against the Jesuits and other church supporters. The rest of the book follows his confrontation with authorities, romancing and eventual meeting with Montanelli.

The Gadfly rose to prominence in the Soviet Union and the People's Republic of China due to its anti-religious themes fitting alongside the atheist side of communism. More than 2,500,000 copies were sold in the USSR, where it became a mandatory read in schools and regarded as a classic. The novel was adapted into multiple movies, such as Ovod by Aleksandr Faintsimme in the USSR and Niumeng by Wu Tianming in China. Ironically, the book was only translated into Italian in the 1950's.

The Gadfly contains examples of: