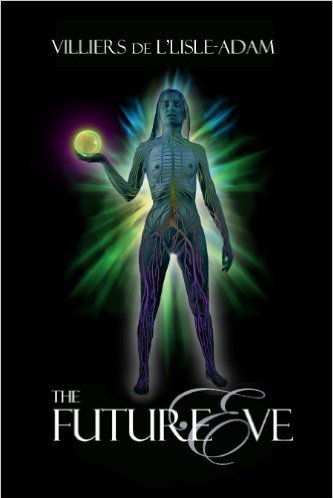 "Let us try to obtain from science an equation of love. It will save thousands and thousands of lives."

"Now, I am going to show you, seriously, the organisms of the new electric human creature - The Future Eve - which, aided by the artificiality which has been in vogue for a long time, seems to meet in full the secret wishes of our race."
—Thomas Edison (as written by Villiers de l'Isle-Adam)

The Future Eve (original title: L'Ève future. Also translated as Tomorrow's Eve and The Eve of the Future) is a French science fiction novel written by Auguste Villiers de l'Isle-Adam in 1886.

The plot starts off with a fictionalised Thomas Edison (renamed "Professor X" in some editions) being visited by Lord Ewald - an old friend of his - who has ended up in a very dysfunctional relationship with his fiancée, Alicia. Edison's solution? Turn Hadaly - the Fembot he is working on - into a copy of Ewald's fiancée and have him marry her instead, with everybody else none the wiser.

Along the way, we are introduced to some other amazing things, including a movie with both colour and sound (years before either of those things actually existed), a secret, underground aviary with mechanical birds who can sing and recite poetry, and a woman who can achieve Astral Projection using a mystical ring. We also find out why exactly Edison is so keen on helping his friend, and Edison's children make a cameo or two.

The story created and codified several robot tropes. It is notable for popularising the term "android" (or rather, "andraiad") in the English language. In 1896, it was adapted into a movie in its native country, making it the first film to feature a robot. It is also believed to have inspired the 1927 novel/silent film Metropolis, which it shares quite a few concepts with. The anime Ghost in the Shell 2: Innocence also references this story a few times. Hadaly herself would go on to appear in the Massive Multiplayer Crossover The Empire of Corpses.