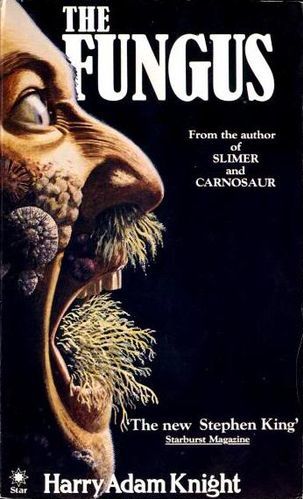 You might wanna see a doctor about that...
"It grows on you."
— Cover Blurb
Advertisement:

The Fungus is a 1985 Science Fiction novel written by John Brosnan (Carnosaur, Slimer) and Leroy Kettle (who co-wrote Slimer with Brosnan) under the pseudonym "Harry Adam Knight."

London mycologist Jane Wilson's efforts to cultivate a new species of agaricus bisporus fungus, using an experimental enzyme, CT-UT-8471, have success in the laboratory. Unfortunately, despite her best efforts at containment, she accidentally carries several thousand microscopic cells of a. bisporus infused with CT-UT-8471. The enzyme spreads throughout England, causing all manner of local fungi to begin growing like crazy, soon overtaking the whole country, including infesting the bodies of human beings.

With the threat of an epidemic on the rise, the government goes to Dr. Wilson's estranged husband, Irish author Barry Wilson. Along with fetching South African tropical medicine specialist Dr. Kimberley Fairchild and British Army Sergeant Terence Slocock, Barry is to lead a mission into the fungus-infested heart of London in order to either locate his wife or her notes at the Institute of Tropical Biology to find a meands of combating CT-UT-8471 before the entire world winds up like England.

But as the group travels deeper and deeper into the heart of fungus-infested London, riding in a specially designed armored personnel transport, tensions begin to mount, placing the mission in jeopardy.

Long out of print, it was finally reprinted in 2017 with a new introduction by co-author Leroy Kettle.