Film / Ghosts Can't Do It 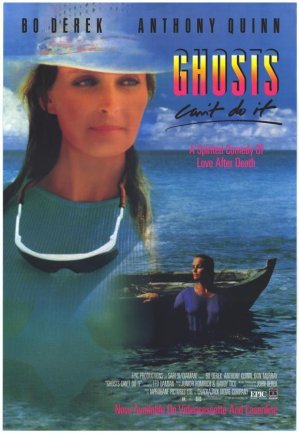 Ghosts Can't Do It is a 1989 American romantic fantasy comedy film written and directed by John Derek, and starring Bo Derek and Anthony Quinn.

Scott and Kate are happily married despite their notable age difference. After Scott suffers a heart attack that leaves him ravaged and unable to have sexual relations with Kate, he commits suicide and becomes a ghost that only Kate can see and speak with. To make it possible for Scott to return as a human, they conjure up a plan to have a young man die so that Scott can take his body.

Ghosts Can't Do It provides examples of: