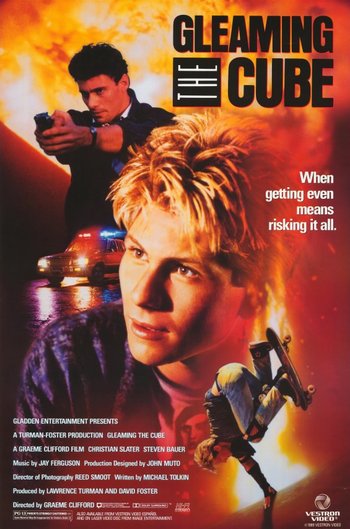 Brian: Adults are predictable.
Vinh: Don't count on it.
Brian: Yeah? They're living under this illusion that life as we know it is gonna continue forever, so they expect you to behave as though what you do today is gonna have an effect on where you'll be in 30 years. (Beat) l mean, it's ridiculous to think there's gonna be anything in 30 years, you know? l don't know what's worse, you know? Being blown up in a nuclear war or having a 7-Eleven on every corner.
Advertisement:

A 1989 movie starring Christian Slater, Gleaming the Cube features the exploits of Brian Kelly, who has an adopted Vietnamese brother named Vinh Kelly. Vinh dates a girl named Tina Trac, and he's the straight-arrow kid who, unlike Brian, never gets busted by the cops. As an example, Brian gets busted for illegally skateboarding in someone's emptied pool. Meanwhile, Vinh is fixing up Brian's geometry homework.

Brian is your typical 80s skateboarder kid, a lot more interested in hanging out with his skating buddies than in keeping up with his school work. Unfortunately for him, reality intervenes when Vinh gets a little too curious about the activities of the VACRF, an anti-Communist organization whose stated purpose is to send medical supplies to Vietnam.

This film is a minor cult classic among people who remember The '80s, but for the most part it tends to be overshadowed by Slater's later, far more memorable works Heathers and Pump Up the Volume.

The meaning of "gleaming the cube" is defined In-Universe as pushing yourself beyond the limit of what is normally possible - if you envision the normal limits of possibility as a cube, if you're beyond that limit then you're outside the cube and can polish the surface to make it shine.

Note that this page will have unmarked spoilers about the movie.