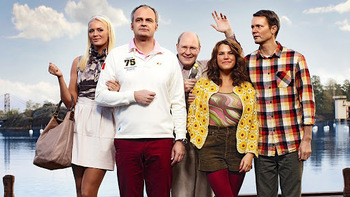 La lalalaa la la la laa...
Solsidan (literal English translation: The Sunny Side) is a Swedish comedy series that has been running since 2010, which takes place in the titular detached area in Saltsjöbaden, Stockholms län. The show follows a cast consisting of several married couples (and their children). Episodes tend to revolve around how the characters' flaws, big or small, lead to conflicts - apart from when the problems are caused by clumsiness or genuine misunderstandings. In order:
Advertisement:
Advertisement: