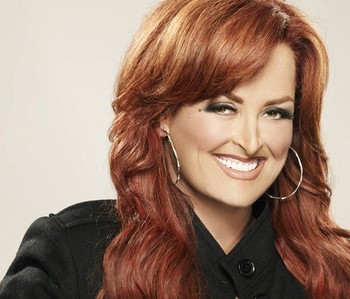 Originally one-half of the Country Music mother-daughter duo The Judds, frontwoman Wynonna Ellen Judd (born Christina Claire Ciminella, May 30, 1964) broke off for a solo career that lasted most of The '90s.

Wynonna spent most of The '80s singing lead vocals in The Judds alongside her mother, Naomi. But Creative Differences and Naomi's bout of hepatitis C allowed the two to split in 1991.

Wynonna signed with Curb Records in 1992 and launched her career with her self-titled debut album Wynonna, which was certified quintuple-platinum and sent all three of its first singles to #1: "She Is His Only Need", "I Saw the Light", and "No One Else on Earth". Her sophomore album Tell Me Why was not quite as successful, but still accounted for multiple radio hits. After a brief hiatus in 1995, she returned in 1996 with Revelations, followed by the Greatest Hits Album Collection and the less successful The Other Side and New Day Dawning. The latter included a bonus EP, Big Bang Boogie, that reunited her for four songs with her mother.

Her musical output has remained consistent throughout the 21st century, despite diminishing returns at radio. While as one-half of the Judds the material was usually traditional-leaning country, the younger Judd's solo output has found shades of pop, rock, AC, and dance-pop.

She is the sister of actress Ashley Judd and wife of Michael Scott "Cactus" Moser, drummer for late-80s country band Highway 101.