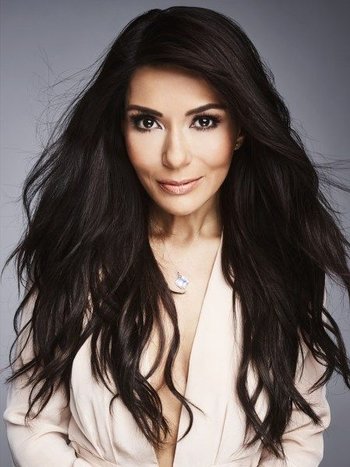 Marisol Nichols (born November 2, 1973 in Chicago, Illinois) is an American actress. She is of Hungarian Jewish descent on her biological father's side. Her mother is Mexican-American. Nichols was raised by her mother and stepfather. She also has two brothers.

Nichols is best known for her role as Special Agent Nadia Yassir in the FOX terrorism thriller 24, which she portrayed during its sixth season in 2007.

Outside of that series, she has appeared frequently in television, holding main or supporting roles in works like GCB, NCIS, and Criminal Minds.

She's also known for her work in works intended for a young adult audience. She appeared as the The Desert Wolf on MTV's Teen Wolf, based on the film of the same name. Since 2017, she's starred as Hermione Lodge (mother of Veronica) in The CW's Riverdale, based on the Archie Comics franchise.

She and director Taron Lexton married in 2008. They had a daughter named Rain the same year. They divorced in 2020 though. Nichols became a Scientologist in the 1990s, and still practices the religion.

Examples from her work include: