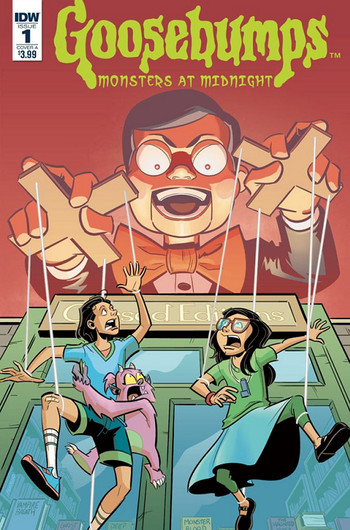 "If you are new to Goosebumps-or if you are a Goosebumps fan, I hope you will find some excitement in this terrific collection of new Goosebumps adventures. '"
— R.L. Stine
Advertisement:

A horror anthology comic book series based on the Goosebumps franchise, published by IDW. Starting in 2017, the series consists of four story arcs, and the creative team in charge of the comics changes with each new arc. The first arc, Monsters at Midnight began in October of 2017, the second arc, Download and Die! began in March of 2018, and the third arc, Horrors of the Witch House began in May of 2019. A fourth, Secrets of the Swamp, began in September of 2020.

Not to be confused with Goosebumps Graphix, which were straight forward adaptations of specific books.

This series provides examples of these tropes