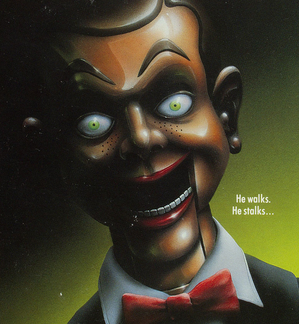 "Who are you calling dummy, dummy?!"
For a horror book series, how do you not expect Nightmare Fuel to come a-creeping? This is considered one of the scariest children's book series around for a very good reason.
Advertisement:

As a Nightmare Fuel subpage, all spoilers are unmarked. You Have Been Warned.

The books — in general:

Original series
Anthologies
Goosebumps Series 2000
Let's face it: all of Series 2000 is Nightmare Fuel. Compared to other Goosebumps spin-offs, it's much, much, much Darker and Edgier than it sounds, has outlandish plots, more extreme violence and gross-out content, etc, etc. Is it any wonder why the series got cancelled after just two years and twenty-five books (versus the original series' sixty-two installments in six years)?
Spinoff series
Advertisement:
Goosebumps: Most Wanted
Goosebumps SlappyWorld 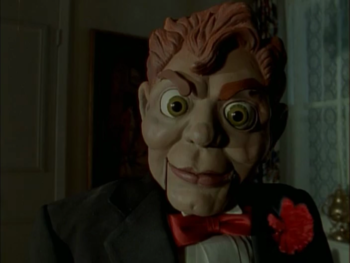 Even when he's not alive, Slappy still manages to be scary as hell!