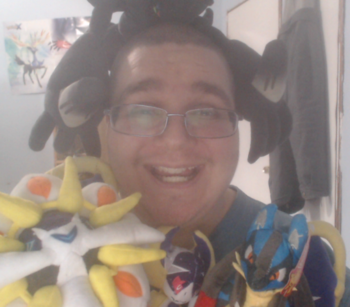 MF217 in his natural habitat, showing his distinct love of plushes and goofing around with them.
Advertisement:

Real name: Martin "Marty" W. Mollohan. Screen name: MF217, AKA MightyFan217 and previously known as Chronicle-King note alongside numerous other usernames in the past that are too numerous to list here, is a fanfiction author, artist, novice YouTuber and video game designer. He is the creator of the Massively Multiplayer Crossover known as Citadel of the Heart, although is mostly better known for his own original works content much of the time. Born on May 9th of 1994, he was diagnosed with Autism at a young age, and he began his (current) works beginning with 2014, but didn't begin working on them extensively until late 2015. He does have older works than the fics before Citadel Of The Heart, but he considers almost all of them to be an Old Shame in comparison; not even the Early-Installment Weirdness of Truth and Ideals is safe from his views on this. However, despite that, he still believes there to be always room for improvement, even when it comes to his newer stuff; he even views his artwork as of late to be in need of much more improvement, especially in the anatomy department.

MF217 can be kind of an unorthodox individual to speak to directly; he used to be more social in this regard, as seen in the author's notes of earlier chapters of Truth and Ideals, but by the time he reached a larger amount of watchers and followers, he dropped these replies to his own reviewers entirely and began concentrating on solely getting the work he has to do done. Considering MF217 also has a very, very active gaming lifestyle, needless to say the chances of getting into direct communication with MF217 are rather grim; locked behind the overtly busy schedule MF217 has set up for himself. While he will sometimes try and communicate with select reviewers for his stories, he is rather cautious about approaching his readers ever since an incident with a reviewer in particular that led to him very hastily considering DinoSquad RX to be an Old Shame. However, despite that, he is continuing to work on DinoSquad RX with it getting its remastered version earlier meant to be a Fix Fic for his own Alternate Universe fic.

A more complete list can be found on his Troper page.