Film / The King of Kings 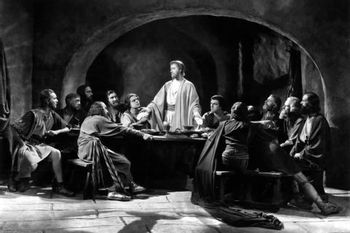 The King of Kings (1927) is a Biblical epic telling the story of Jesus, directed by Cecil B. DeMille. It concentrates on the last days of his life, including the Passover entry into Jerusalem, the Last Supper, his betrayal by Judas, and his crucifixion.

DeMille, who had started out in movies as something of an auteur (see his classic The Cheat), spent the rest of his career making epic, big-budget spectaculars like this movie, including several with religious themes, such as his famous The Ten Commandments. H.B. Warner, who plays Jesus, went on to have a long and very successful career as a character actor.

A 1961 film called King of Kings isn't really connected with this film, other than also being about Jesus (that one told the whole story of Christ starting from birth.)