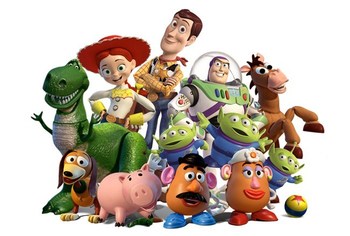 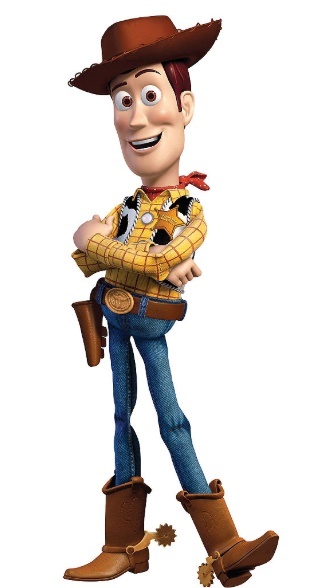 Voiced by: Tom Hanks (movies and shorts), Jim Hanks (most other media)

Woody is a 1950s pull-string cowboy doll. He is Andy's favorite toy, and the team leader of the main toy protagonists of the Toy Story films. He is at first jealous of newcomer Buzz, but after going through hell at Sid's house they become friends for life. In Toy Story 2 Woody is stolen, finds out he was the hero of the TV show Woody's Roundup and meets his co-stars from it. 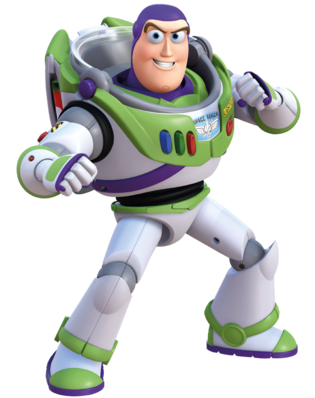 "To infinity and beyond!"

Buzz Lightyear is a space-themed plastic action figure. He features a working wrist communicator, karate-chop action, blinking laser light, pop up wings, glow in the dark paint, and talks when the buttons on his chest are pushed. When he first came out of his box, he believed he was a real spaceman and not a toy, but he eventually came to terms with his role as a toy, which didn't prevent him from becoming a hero in his own right. In Toy Story 2, Buzz is more down to earth and leads a rescue party to find Woody. As of the sequel, the toys basically view him as the second-in-command. 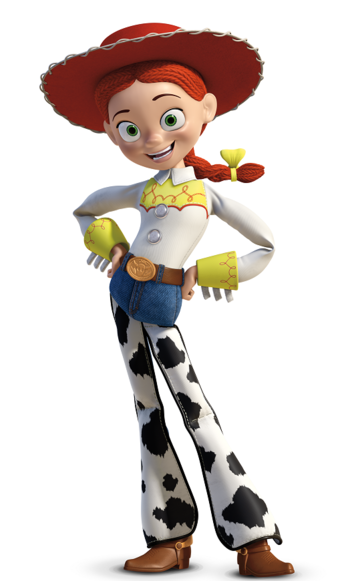 Jessie is a pull-string cowgirl doll, and Woody’s costar on Woody's Roundup. Her first owner Emily abandoned her, and she was put into storage by Al McWhiggin. At the end of Toy Story 2 she returns with Woody to Andy's room, and is implied to hold a torch for Buzz, a plot thread continued into Toy Story 3. 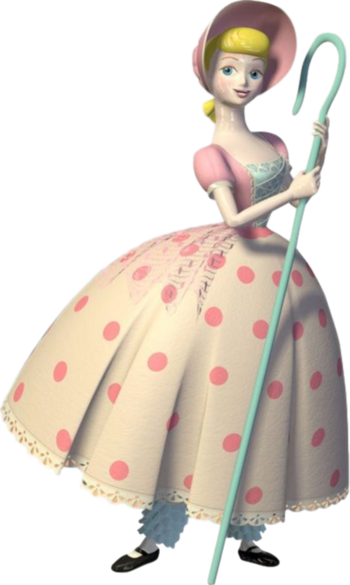 "I'm just a couple of blocks away." 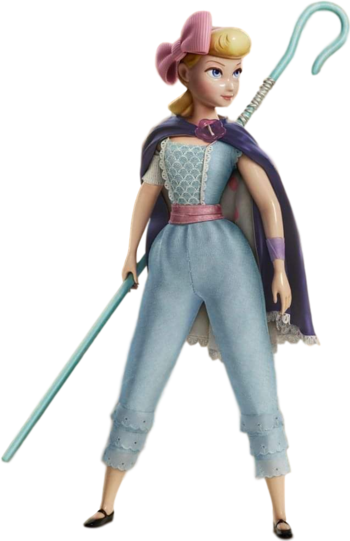 "Open your eyes, Woody. There's plenty of kids out there. Sometimes change can be good."

Bo Peep is a lamp's porcelain doll who was offered to Andy's sister Molly. She is based on the eponymous nursery rhyme, who tends to three lambs. She has a romantic interest in Woody and is always a nice, sunny lady, and often acts as the voice of reason in Andy's Room.

She was later donated, then ended up at the Second Chance antique shop, then decided to leave it. Woody bumped into her again, finding out that she survived on her own without the need of belonging to a child anymore. 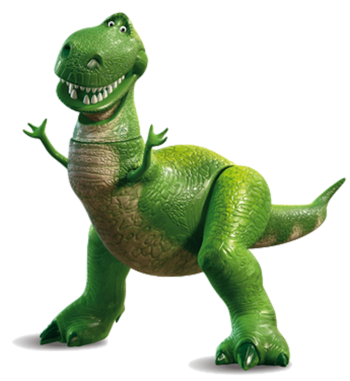 "I just don't think I can take that kind of rejection."

Rex is a plastic Tyrannosaurus toy. He has a huge inferiority complex because of his tiny arms. He constantly tries acting scary, but due to his timid nature, he can never pull it off, and constantly worries about getting replaced with a meaner dinosaur. In Toy Story 2 he is seen obsessing over a Buzz Lightyear video game he can't beat. He is part of Buzz's rescue team, and when he comes face to face with Zurg, he manages to knock him down an elevator shaft. This results in Rex gaining some confidence in himself.

He is also a bit of a gamer, as he is seen playing video games in the second and third movies. 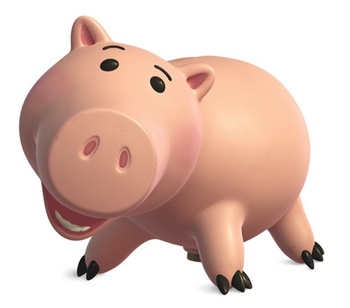 "May I remind you that some of us are carrying over $6 in change?"

Hamm is a plastic pink piggy bank. He has a witty sense of humor and is best friends with Mr. Potato Head. He is the second, after Potato Head, to turn against Woody, when he thought he pushed Buzz out the window. In Toy Story 2 he is part of Buzz's rescue team. 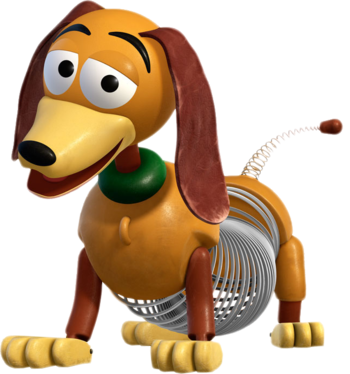 "I knew you were right all along, Woody. Never doubted you for a second!"

A plastic dog with leather ears and a slinky in the center of his body. He is very loyal to Woody, and risked himself to help the duo into the back of the moving truck. In Toy Story 2 he is part of Buzz's rescue team. 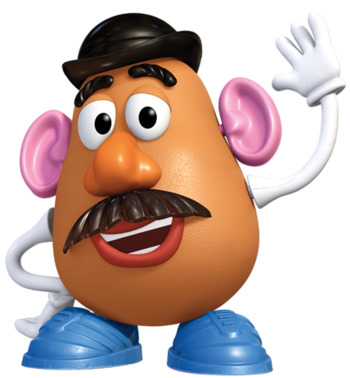 "What are you looking at, ya hockey puck?!"

A potato-shaped toy made by Hasbro, whose removable facial features can be stored inside his body. He is short tempered and is the first to turn against Woody, when he thought he had pushed Buzz out the window. For Christmas, Andy's sister, Molly, gets a Mrs. Potato Head. In Toy Story 2 Potato Head is part of Buzz’s rescue team. He later saves the lives of three squeeze toy aliens which to his dismay, his wife adopts. 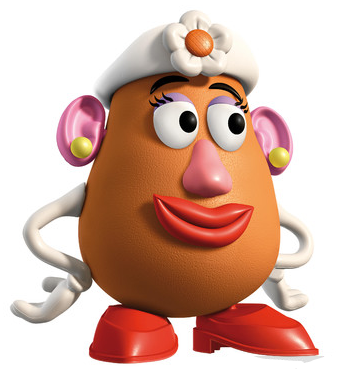 Mr. Potato Head's loving wife. Before he goes on his adventure she makes sure he packs (among other things) an extra pair of shoes, and his angry eyes. When he comes back she decides to adopt the three squeeze toy aliens. In Toy Story 3, she loses one of her eyes, which later proves to be quite useful.

Three-eyed rubber squeeze toys first seen at Pizza Planet in a claw game. They worshipped the claw which they dreamed would choose them. Three more aliens are found in the Pizza Planet truck in Toy Story 2, and they were taken back to Andy's room and were adopted by the Potato Heads. 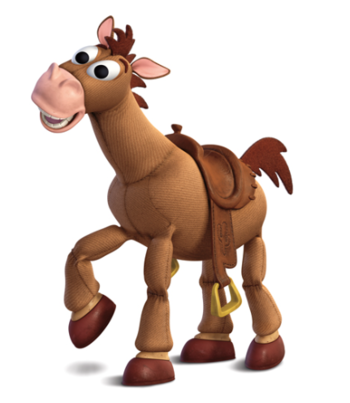 Bullseye is Woody's horse from the show Woody's Roundup, though this particular Bullseye toy is Jessie's if he is anybody's. He cannot talk and has the personality of a big puppy dog.