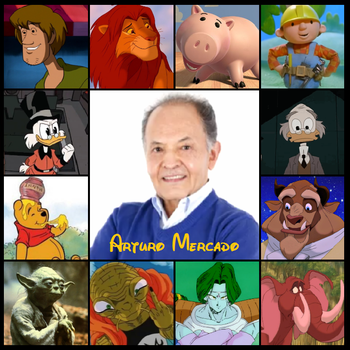 Arturo Mercado, and just a small taste of his many roles.
¡Caracoles! explanation Literally Snails, but the original line was, of course, Zoinks!
Advertisement:

Arturo Mercado Chacón (born December 7, 1940) is a renowned Mexican voice actor with more than 50 years of experience in the artistic medium. Known for his numerous voice records and the ability to cover different types of characters.

As the VA for George Clooney

As the VA for Jackie Chan

As the VA for Tom Hanks