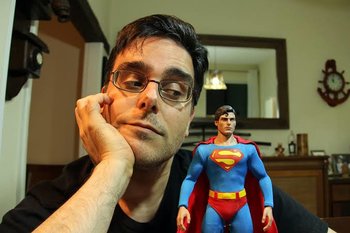 Guilherme Neves Briggs (born July 25, 1970 in Rio de Janeiro, Brazil) is a Brazilian voice actor, artist, director, narrator and blogger and active since 1991. Extremely prolific and well-known in the world of Brazilian portuguese dubs, both in animation and live action, he is a prime example of a Man of a Thousand Voices, well known for his Large Ham type roles, but is also regularly cast in heroic leads like Superman and Optimus Prime, psychos like Chucky and Him, serious roles like Mr. Spock and Mewtwo and comedic roles like Freakazoid! and Cosmo. He is (more-or-less) the official voice actor for Harrison Ford, Denzel Washington, Dwayne Johnson, Tom Hardy and Brendan Fraser.

Tropes associated with Guilherme Briggs and his roles: