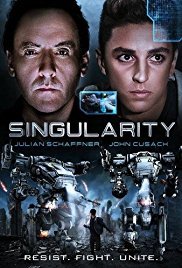 Singularity is a Swiss/American science fiction film written and directed by Robert Kouba and starring John Cusack, Julian Schaffner, Jeannine Wacker and Carmen Argenziano. Originally filmed in 2013 as Aurora without Cusack, additional scenes were added of Cusack for a 2017 release as Singularity.

In 2020, C.E.O. Elias VanDorne (Cusack) asks his novel artificial intelligence, Kronos, to solve the problems of Earth. Kronos decides that humans are the problem and begins an extinction agenda against them, overseen by VanDorne and his business partner Damien (Argenziano), who have uploaded themselves into the machine. Andrew (Schaffner), one of the employees of VanDorne's robotics company, seemingly survives the initial holocaust. Ninety-seven years later, Andrew awakes to a ruined world and finds a strange amulet in a dilapidated house, and puts it on. Not long after, he meets Calia (Wacker), a human survivor who is seeking the city of Aurora, fabled to be the last human stronghold. Coincidentally, the amulet that Andrew found bears the symbol of Aurora. Meanwhile, discussions between Elias and Damien indicate that Andrew is a sophisticated artificial intelligence in human form, meant to track down the location of Aurora by befriending human survivors.