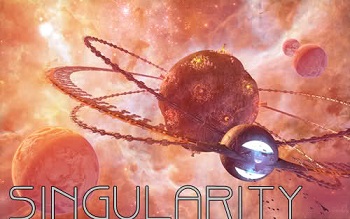 As quoted from the community pages, Singularity was a panfandom science fiction roleplaying game played out between a gigantic ring-world orbital station and a planet in the pre-Eden stages of terraforming.

The space station is named Sacrosanct. It's divided into 32 zones, each the size of a small country... and it's nearly empty. The reason why is known only to the A.I. formerly in charge, a certain blue lady designated as Hypatia. She was a little nuts.

In contrast to that, the planet is named Asphodel and is a base for The Resistance, though the application of The Power of Friendship is debatable at best and non-existent at worst. Oh, and watch out for the wildlife.

Player characters are brought into the mix when they are pulled into Sacrosanct via what amounts to a rip in space-time. They dropped into the junkyard and are sent through the chemical showers while their belongings are decontaminated, before being given a wearable and released into the station. Oh right, and they're also told that there's no way back. This is where the fun begins.

The profile page can be found here

Specific events in the game provide examples of:

Characters in the game provide examples of: