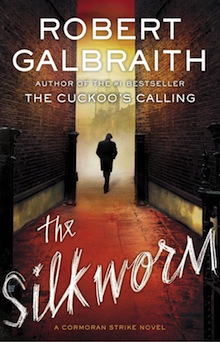 Robin: We can't all be literary geniuses.
Strike: Thank Christ for that, from all I'm hearing about them.

The Silkworm is the second crime novel in the Cormoran Strike series by Robert Galbraith.

Eight months after solving the Lula Landry case, Hardboiled Detective Cormoran Strike has become a minor celebrity and is doing rather well for himself. His Hypercompetent Sidekick Robin Ellacott is set to marry the man of her dreams in a few months, but secretly feels she is unappreciated by her fiancé, who deplores her job, and her boss, who she believes fails to see her potential.

This tension is put to the test when Leonora Quine arrives at Strike's door, imploring him to find her husband, author Owen Quine, who has been missing for almost two weeks. Shortly before he disappeared, Quine was all set to publish what he believed was his Magnum Opus — Bombyx Mori, Latin for silkworm. There's just one problem: his publishers refused to release the book, which uses facsimiles of real people in his World of Symbolism, and his portrayal of said individuals was spiteful at best, and at worst could potentially constitute libel. With excerpts of the manuscript circulating among Britain's literary elite, it's up to Cormoran and Robin to find Quine before someone takes violent umbrage to his work...

Adapted into the second season of the TV series Strike.

The Silkworm contains examples of: