Film / Paris When It Sizzles 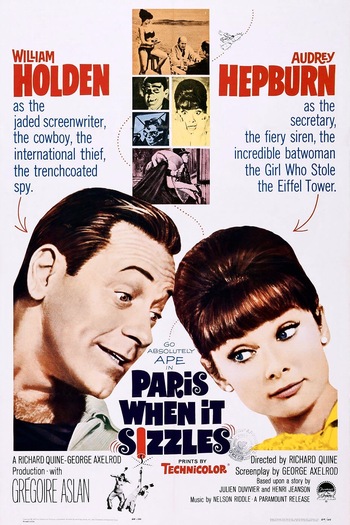 A 1964 American romantic comedy film directed by Richard Quine and reuniting the stars of Sabrina — Audrey Hepburn and William Holden — a decade later.

Richard Benson (Holden) is a Hollywood screenwriter who's been living it up in Gay Paree and now finds himself facing a deadline to complete a script for The Girl Who Stole the Eiffel Tower. Which he hasn't even started. He hires an agency typist, Gabrielle Simpson (Hepburn), to assist him, and over 48 hours they hash out a script and fall in love. As they do so, we see the film they write together, which is a ludicrous romp throwing together and sending up every movie cliché you can think of.