Recap / The Amazing World of Gumball S3E28 "The Question" 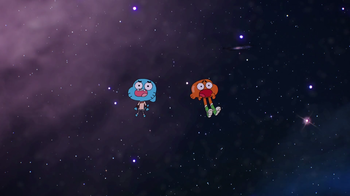 "What's the point in our lives?"
After Gumball and Darwin experience oneness with the universe (during a sugar high caused by eating cereal marshmallows), they realize, "What's the point in [our] lives?" and go on a quest to find the answer to that age-old question: "What is the meaning of life?"