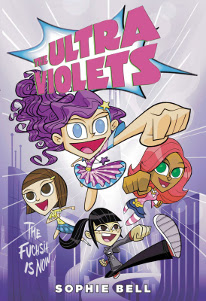 The Fuschia is Now!

The Ultra Violets is a book series by Sophie Bell, following the adventures of superpowered middle-school student quartet, Iris, Cheri, Scarlet, and Opaline. Illustrations are by Chris Battle, and Ethan Beavers.)

The four were just regular girls until a sleepover at the Fascination Lab (FLab, for short) on the 42nd floor of the Highly Questionable Tower ended up triggering a chain reaction that culminated in the four best friends getting covered in a mysterious purple goo, Heliotropium.

Four years later, after unintentionally exposing themselves to the chemical once more, the girls discover the stuff gave them more than the need for a decontamination shower—it had given them superpowers!

Together, the four form the Ultra Violets, a superhero team dedicated to protecting Sync City from the evil schemes of BeauTek, from mind-controlling perfumes to evil mutants manufactured at the Mall of No Returns!