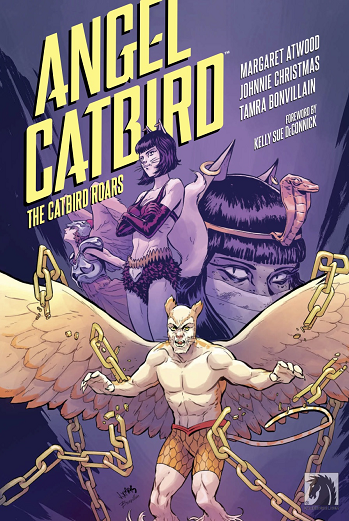 Strig Feleedus is a young genetic engineer working for one Dr. A Muroid. Muroid has Strig working on a project that involves combining the DNA of multiple creatures into one singular entity. But what Strig doesn't know is that Dr. Muroid is actually a Were-Rat, who plans to create an army of Rat People to help Take Over the World.

One night, while on his way out, Strig is followed by his cat, Ding, who runs out of the house after a mouse, while an owl tried dive-bombing it. Strig tries to stop Ding, and it all comes to a head when they're all hit by a car (being driven by Dr. Muroid), spilling the experimental formula Strig was carrying all over himself, Ding, and the owl. The DNA of all three animals combine together, giving Strig the ability to transform into a Human-Owl-Cat Hybrid with the ability to fly, the ability to speak to animals, and a new appetite for rats and birds.

With the help of his co-worker, Cate Leone, Strig learns about the secret world of were-cats, and of Dr. Muroid's Evil Plan. So, taking up the mantle of Angel Catbird, Strig becomes a hero to help foil Dr. Muroid's scheme.

The series was released on September 6th, 2016.