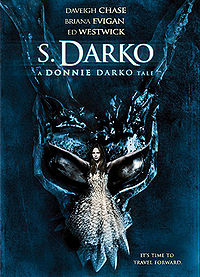 My Frank! What big eyes you have!
Now 7 years later, Donnie's youngest sister, Samantha, seemingly alone and lost in the world, has run away from her home shattered by the death of her brother. Drowning in sadness and unable to dream, she has drifted deeper into the darkness of her sleep. And when darkness consumes the starlight, nightmares rule the night...
Advertisement:

Samantha "Sam" Darko (Daveigh Chase) and Corey Corn (Briana Evigan) are two eighteen-year-olds on a road trip to California hoping to make it big as dancers there. Along the way, their car breaks down in Conejo Springs, a small town in Utah. The town badass, Randy Holt (Ed Westwick), comes to their rescue, cigarette in hand.

As they end up staying for a while they meet a Donnie look-a-like running amok in military clothes, a nerdy kid with a rash, a Badass Preacher and experience many a weird going-on.

The sequel to Donnie Darko no fan will admit exists. Though the film is widely considered inferior to its predecessor, it does have some features that were praised, such as the stunning cinematography and nineties pop songs.