Film / The Discreet Charm of the Bourgeoisie 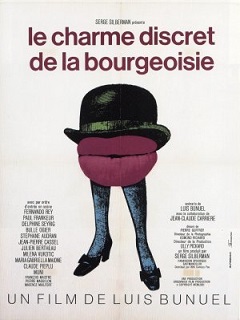 Francois and Simone Thévenot (Paul Frankeur and Delphine Seyrig); Rafael Acosta, the minister from "Miranda" (Fernando Rey); and Simone's sister Florence, all arrive at the home of Henri and Alice Senechal (Jean-Pierre Cassel and Stéphane Audran) for dinner. Alice is surprised to see the others, as she was under the impression that the dinner party was for the following night. They go out to an inn, but find it empty of other diners. They leave when they're informed that the manager died and mourners are wailing for his body in the next room.

Things get even weirder and surreal from there, as the quest for dinner is repeatedly frustrated. There are dream sequences, and dreams within dreams. An officer in the army sits down with the women and absolutely out of nowhere tells them about how he murdered his stepfather when he was a boy. One dining room turns out to be a stage set for a play. Another dinner is interrupted by soldiers opening fire. And they never do get to eat.

If they list their own tropes, they must have their reasons.