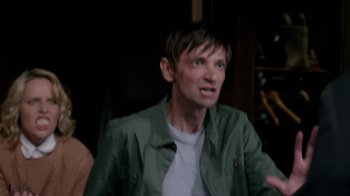 Let's all be grown-ups here and have an adult conversation.

Where has Garth been all this time? The brothers find him in a Wisconsin hospital, but he's shifty and escapes from under their noses. They trail him to an apartment where a female werewolf attacks Sam. Garth stops Sam and Dean from shooting and explains that he too is a werewolf now, dating from an attack that happened months ago in Maine while he was on a hunt. The young woman, Bess, has been married to Garth for four months.

Dean has dinner with the Myerses, Bess' family. It goes uncomfortably, but he starts to believe that this pack of werewolves may be okay. That belief is rattled when the town sheriff lures the Brothers to a fake crime scene and starts to transform in order to kill them. Dean takes him out quickly but the sheriff was wearing a silver bullet around his neck with the word "Ragnarok" inscribed in the casing. This ties into the beliefs of the church where Bess' father Jim is the minister.

Reverend Jim, though, is a believer in peaceful coexistence. It's his wife Joy who represents the Maw of Fenris, a group dedicated to the eradication of humanity. She plans to kill Garth and Bess and frame the Winchesters in order to start an inter-species war.

After Joy and her followers are defeated, the Winchesters have a talk. Dean apologizes for taking off after Gadreel was exorcised from Sam and they agree to hunt together again. Their personal relationship is still damaged, and Sam doesn't agree to being brothers again.

For this episode: 4 werewolves and 1 deer.