Tabletop Game / Spears of the Dawn 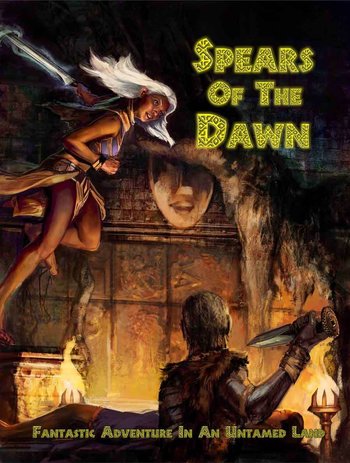 Spears of the Dawn is a tabletop roleplaying game published in 2013 by Sine Nomine Publishing. It is set in a world based on Ancient Africa and has a rule set based on and compatible with early-editions Dungeons & Dragons.

The game takes place in an area known as the Three Lands (the jungles of the Green Land to the furthest west, the savannahs of the Yellow Land in the middle, and the deserts of Black Land to the furthest east). Until forty years ago, a Forever War raged against the undead Eternal of the Sixth Kingdom, but a final alliance of the five living kingdoms ultimately broke its power. However, the peace has been a mixed blessing, as petty rulers now turn on each other for lack of a common enemy and customs made for wartime grow increasingly stifling leading to discontent and strife. To make it worse, the task of defeating the Sixth Kingdom was left unfinished, and Eternal still survive in tomb-houses scattered across the land, plotting their revenge.

Player characters belong to one of four classes: