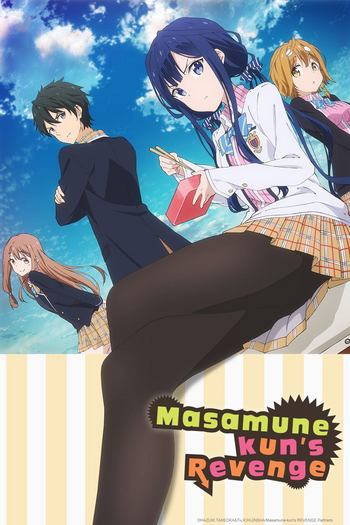 Masamune Makabe is a popular, handsome high-schooler... except he used to be anything but. As a child he was fat and frequently picked on, and to add insult to injury, a girl he liked rejected him and called him "Pig's Foot", making the rest of his childhood a living hell.

Swearing vengeance, he sought out his grandfather, a martial artist, to help polish his mind and body. After eight years, he returns to urban life changed beyond recognition. What didn't change, however, is his burning desire to get back at Aki Adagaki, the girl who called him "Pig's Foot" years ago, now the Alpha Rich Bitch of the school he has transferred into.

After saving her from a disgruntled suitor, Masamune finds himself in Aki's good graces... which is the first step of his grand scheme for revenge: date Aki, earn her love, then dump her in the harshest way possible when she is at her most emotionally vulnerable. With nobody but Aki's maid/schoolmate Yoshino Koiwai roped in on the plan, Masamune embarks on his quest to redeem himself and deliver payback to his childhood tormentor...

...and it should go according to plan if adolescent yearnings for affection don't get in the way.

Masamune-kun's Revenge (政宗くんのリベンジ / Masamune-kun no Revenge) is a completed 2012-2018 manga written by Hazuki Takeoka and illustrated by Tiv, published by Ichijinsha under the "Monthly Comic Rex" imprint. The series also received an Animated Adaptation for the Winter 2017 Anime season, directed by Mirai Minato for SILVER LINK., with a second season, Masamune-kun's Revenge R, announced in April 2022. It is available for worldwide streaming on Crunchyroll here

and with an English dub on FUNimation here

Months after the manga ended, a few bonus chapters were published on Comic REX titled Masamune-kun's Revenge -after school-. The story, like the OAD, gives more closure to the cast and follows them through their school year.