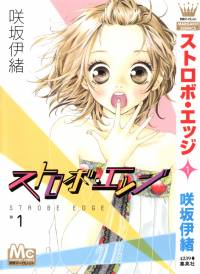 "'Love'... what kind of feeling is it? It makes your chest tighten, it tears at your heart, it makes you want to cry for no reason, and your chest hurts like something's been stabbed into it... but it's not a bad feeling at all."
Advertisement:

Strobe Edge is a shoujo manga by Io Sakisaka and ran in the magazine Bessatsu Margaret from 2007 to 2010. Credited for boosting Sakisaka's fame, it was compiled in ten volumes. Throughout its run, it was met with widespread success, spawning a voice-over comic, two drama CDs, and four Light Novel adaptations. In 2014, a Live-Action Adaptation was announced (probably to cash in on Sakisaka's fame with her successor, Blue Spring Ride) and released in March 2015.

Ninako Kinoshita is a naive high school student who doesn't really know what love is. Her friends convince her that she must be in love with her childhood friend Daiki Korenaga, who has always held feelings for her. But Ninako gradually realizes what love is through her growing feelings for Ren Ichinose, the school's enigmatic heartthrob. More conflict arises when Ninako learns that Ren... has a girlfriend, Mayuka Korenaga - a famous model and Daiki's estranged older sister. Not only that, but Takumi Ando, Ren's middle school friend, develops feelings for Ninako too. For a girl who once didn't know what love was, what is Ninako to do?