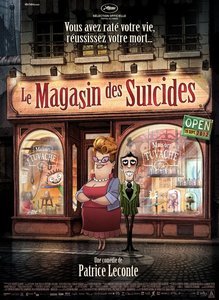 "Has your life been a failure? Let's make your death a success."
- The Suicide Shop motto
Advertisement:

The Suicide Shop (originally: Le Magasin Des Suicides) is a 2012 Black Comedy Animated Musical based on the book of the same name by the French author and film-maker Jean Teulé. It's about the Tuvaches, the family that runs the afore-mentioned shop in the distant future after the "Big One" where life has become meaningless for most, leading to them seeking out the Suicide Shop, where they have a method to kill yourself for any budget. However, when their youngest son, Alan is born, they discover that he is not like the others...

The Suicide Shop includes examples of: