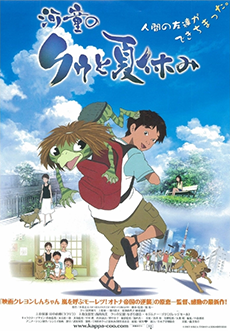 Summer Days with Coo (Kappa no Kū to Natsuyasumi, Summer Vacation with Coo the Kappa) is a 2007 Japanese animated film directed by Keiichi Hara.

Coo, a Kappa who, after witnessing the death of his father at the hands of a samurai, survives for 200 years trapped in the earth as a fossil before being found and resuscitated by a young boy named Koichi in modern day Tokyo.

The story follows Coo’s friendship with Koichi and his family, the challenges he faces living in a drastically changed environment, his search for the remaining Kappas and his impact on the world around him.