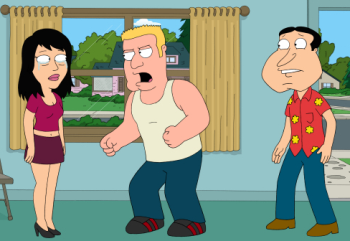 Warning: This episode's take on domestic abuse is NOT played for laughs.
Advertisement:

In this very dark, somewhat dramatic episode, Quagmire nearly dies from autoerotic asphyxiation and ends up in the hospital, but that's the least of it — Quagmire learns that his sister (from the season eight episode "Jerome is the New Black," only her name is Brenda instead of Harriet) is still with her abusive boyfriend, Jeff, and everyone tries to show Brenda that Jeff is bad for her, but Peter, Quagmire, and Joe soon learn that words and reasoning don't work against a bully like Jeff.

"Screams of Silence: The Story of Brenda Q." contains examples of: