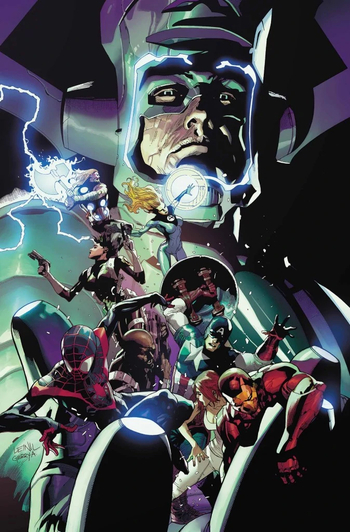 In the aftermath of Age of Ultron, time and space is damaged thanks to Wolverine's jaunts through time. As a result, the Destroyer Of Worlds, Galactus, has discovered the Ultimate universe and has slipped through. Even worse, the first thing he bumps into is his cybernetic Ultimate counterpart, Gah Lak Tus, who merges with him into a gestalt being hungrier than ever. Even worse, the Big G heads for Earth to settle his hunger. Even worse, the heroes of the Ultimate Universe are in a bit of a conundrum: they can't let Galactus have his way and yet they can't just send him back to his universe or deposit him in another universe. What do you do at this point?

Cataclysm is separated into two stories:

Following the comic, three new Ultimate comics were released: Miles Morales: Ultimate Spider-Man, which is Exactly What It Says on the Tin, All-New Ultimates, a team featuring Miles, Cloak, Dagger, Bombshell, Kitty Pryde, and Jessica Drew, who abandons the title of Spider-Woman for that of Black Widow, and Ultimate FF, the Ultimate incarnation of the Future Foundation.

Not to be confused with the original Ultimate Galactus Trilogy.