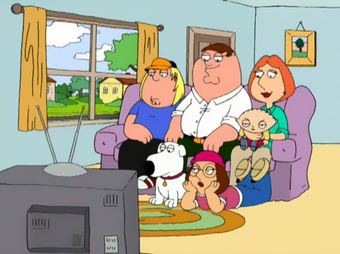 (The Griffins are sitting watching an episode of The Brady Bunch)
Jan: Mom, Dad, I found cigarettes in Greg's jacket.
Mike: Greg, were you smoking cigarettes?
Greg: No, Dad.
Mike: (to Carol) Well, he's lying, there's no doubt about that. (to Greg) Greg, I'm afraid your punishment will be four hours in the snake pit. (Mike pushes a button revealing a trap door in the floor) Maybe that'll give you some time to think about what you've done.
Greg: Aw, man. (dives in)
Jan: That'll teach him.
Mike: And, Jan, I'm afraid you've earned a day in the chamber of fire for tattling on your brother. (pushes a button and unlocks a steel door with roaring flames behind it)
(cut back to the Griffin living room)
Lois: Uch! Smoking! How does a boy like that go so wrong?
Peter: Well, they live in a crummy neighborhood.
Brian: The Bradys?
Peter: Oh, hell, yeah, they got robbers, thugs, drug dealers, aw, you name it.
(a black woman with a plate full of pancakes appears at the window)
Black Woman: You folks want some pancakes?
Peter: No, thank you. (to his family) See, the worst that we got is Jemima's Witnesses.
The first lines of the series.

The series begins when Peter goes to a stag party. Lois tells Peter to make a promise not to drink, considering the effects of what happens when he drinks.

Peter: Not a drop of alcohol is going to touch these lips tonight.
(Smash Cut to the party)
Quagmire: Hey, who wants to play "Drink the Beer"?
Peter: Right here!

He drinks 37 cans of beer (partly so that "the Statue of Liberty would take her clothes off") and the next morning, Peter is home waking up on the kitchen table. Lois chastises him for breaking his promise, but Peter insists that it’s not going to have a negative effect on him. At work, Peter falls asleep at the toy factory and lets dangerous and harmful “toys” (including drugs, axes and grenades) go past his watch, which gets him fired.

Peter tries many jobs to try and make money, yet all fail. Not wanting Lois to find out and not wanting his finances drained, Peter signs up for welfare checks of $150 a week, but a mistake cause the checks to total $150,000 a week.

Meanwhile, Stewie tries to get a mind control device from the kitchen cabinet, all while trying to kill Lois.

With his new fortune, Peter buys his family many expensive things, like the statue of David (which Peter breaks the penis off of) and Collagen injections for Meg (which she wanted through the episode), breast implants for Chris (actually just the squishy bags) and a jukebox in the bathroom for himself. When a check is delivered, Lois discovers it and scolds Peter believing that all his problems can be solved with money. Wanting to make it up to Lois, Peter and Brian head to Super Bowl XXXIII and give the taxpaying people money from a blimp. The blimp is shot down and the two are arrested for disrupting the big game.

In court, Peter is sentenced to 24 months in jail. Lois sticks up for Peter saying that he wanted to give his family money that they needed, but instead is given jail time with Peter. Not wanting his mother gone and not be killed by him, Stewie hits the judge with his mind control ray, which works. Peter and Lois are released and Peter gets his job back. The episode ends with Peter arguing with his family of other ways they can get rich quick, such as a minority scholarship, a sexual harassment dispute, and a disability claim.

"Death Has a Shadow" contains example of: