Film / The House of Yes 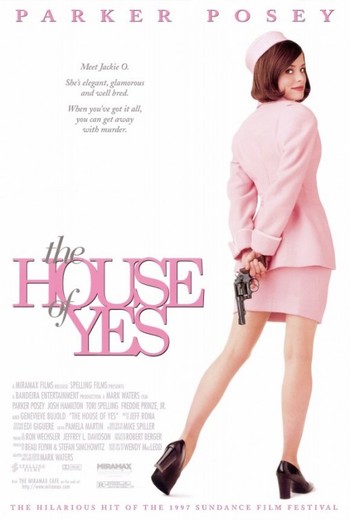 Jackie Uh-Oh!
"Jackie and Marty belong to each other. Jackie's hand was holding Marty's penis when they came out the womb."
— Mrs. Pascal describing her twin children
Advertisement:

The House of Yes is a witty 1997 Black Comedy film about a rather interesting Thanksgiving dinner. It stars Parker Posey, Geneviève Bujold, Josh Hamilton, Tori Spelling, and Freddie Prinze Jr. It was originally a stage play by Wendy MacLeod that was adapted by director Mark Waters.

The Pascals are a well-to-do, upper-class family in Washington, D.C.. Mrs. Pascal (Bujold) is an austere snob who cares for her family since her husband "mysteriously" left them behind. There is Anthony (Prinze), the youngest, and the twins: Marty (Hamilton) and Jackie (Posey). Jackie, aka Jackie-O, is spoiled, stuck-up, and violently insane. She is obsessed with Jacqueline Kennedy and the slaying of John F. Kennedy. She also has major hots for her twin brother, Marty. Marty is perhaps the Only Sane Man in the family. While he and Jackie did have a romantic relationship in the past, he is trying desperately to leave all of that behind and live a normal life. He visits the family during Thanksgiving and brings along a surprise... his fiancée, Leslie (Tori Spelling).

Leslie is a working-class bakery worker from a very humble background so the snobbish Pascal family has trouble accepting her. It doesn't help that Jackie probably wants to kill her. It also doesn't help that Anthony apparently wants to steal her away from his brother. Oh, and there's a hurricane outside, ensuring that everyone stays in the house. In the span of one night, dark secrets are revealed, a loaded gun goes missing, and Hilarity Ensues.