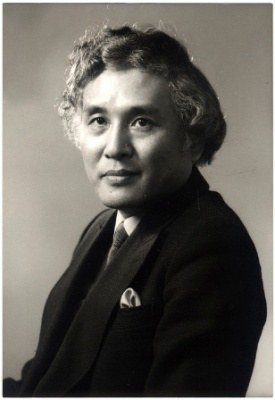 After studying music at the Geidai University of the Arts in Tokyo, he moved to Europe to study at the Conservatoire of Paris. At first, he was fascinated by Western Avant-garde Music, but then he shifted towards traditional East Asian and Japanese music (and Buddhism), growing opposed to excessive Westernization in his birth country much like writer Yukio Mishima was (though without going to the latter's extremes).

In the span of his career, he composed symphonies, ballets, operas and film soundtracks. One out of the two operas he composed would even adapt the aforementioned Mishima's The Temple of the Golden Pavilion, about a famous 14th century Kyoto temple that was burned down by a young Buddhist monk with psychological issues in 1950. Filmwise, he worked quite a few times with director Kon Ichikawa, most notably on Tokyo Olympiad and Enjo, the latter also being about the burning of the Temple of the Golden Pavilion.

He was also considered a pioneer in the realm of musique concrète (music that uses recorded sounds as raw material) and Electronic Music.

Film soundtracks he composed include: