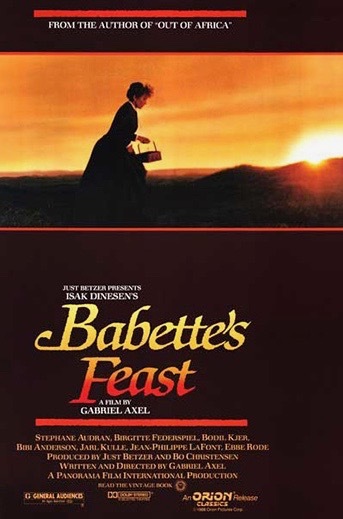 "Throughout the world sounds one long cry from the heart of the artist: Give me the chance to do my very best."
—Babette
Advertisement:

Babette's Feast is a 1987 Danish film directed by Gabriel Axel, set in a remote village of Jutland during the late 19th century. Two spinster sisters are enjoying their humble, secluded life amongst the parishioners of their late father's church, when suddenly one night a French woman named Babette (Stéphane Audran) arrives on their doorstep, having fled from the war and bloody revolution in her home country. With no surviving relatives to shelter her, an old friend of the sisters has sent this mysterious woman to their home for sanctuary.

Despite their meager offerings, the sisters open their home to Babette as a servant who can help them in maintaining the property and aiding in charity work. Fourteen years pass before the outside world intrudes on the three women again: Babette has won a lottery that a friend maintained in France. The sisters fear that this new opportunity will take their friend and helpful servant away from them, but Babette surprises them with an offer: a chance to cook a real French dinner for the late pastor's birthday. Though the sisters agree, suspicion and fear grows amongst the small congregation as to whether the upcoming extravagance conflicts with their ascetic beliefs.

The film was adapted from a story by Karen Blixen aka Isak Dinesen, and like the author's more famous adapted work, won an Academy Award (as Denmark's entry for Best Foreign Language Film).