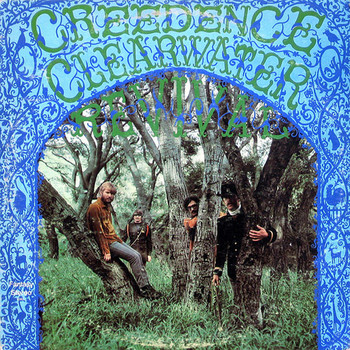 "Oh, Suzie Q, baby I love you, Suzie Q."
"It's been an awful long time since I been home
But you won't catch me going back down there alone
Things they said when I was young are quite enough to get me hung
(I don't care! I don't care!)"
—"Porterville"
Advertisement:

Creedence Clearwater Revival is the debut album of the rock band of the same name, released on May 28, 1968 through Fantasy Records. After having played through the Sixties as as The Blue Velvets, then the Golliwogs, they were given a chance by Fantasy chair Saul Zaentz to record a full-length album on the condition that they change the band name, and thus Creedence Clearwater Revival was born. The band started recording on October 1967, releasing the "Porterville"/"Call It Pretending" single the following month before recording the rest of the album in early 1968. The resulting album sold well, but critics at the time didn't look fondly on it, albeit drastically improving over time. The band's breakthrough single, their cover of Dale Hawkins' "Suzie Q", had peaked at #11 in the Billboard charts, while their cover of Screamin' Jay Hawkins' "I Put a Spell On You" charted at #58.

I don't mess around with tropes, child, what I got is mine: