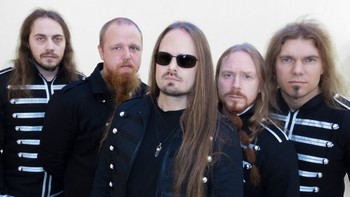 is a Power Metal band from Falun, Sweden. Sound familiar? That's because four of the founding members of the band (currently three) previously played for Sabaton.

The band formed in 2012 after guitarists Oskar Montelius and Rikard Sundén, drummer Daniel Mullback and keyboardist Daniel Mÿhr left Sabaton after recording Carolus Rex (due in part to the group's grueling touring schedule

). They joined up with vocalist Nils Patrik Johansson (Astral Doors) and bassist Stefan Eriksson, signing initially with Despotz Records. They are currently signed to Napalm Records.

The band continues Sabaton's tradition of predominantly historical themes, though they cover topics besides war and their lyrics tend to be more abstract than their parent group. Their name refers to The American Civil War, and they commonly perform in costumes based on Union and Confederate uniforms and named their first three albums after Michael and Jeff Shaara's historical novel trilogy about the war.

In 2014, a third guitarist, Petrus Granar, joined the band to play on Gods and Generals. However, after this second album, Montelius left the band in 2015, citing fatigue; Eriksson also left, leaving the band with no permanent bassist. In 2016, Johansson was dismissed from the band due to personal disputes with the other members, and was replaced the following February by Houston, Texas-based vocalist Kelly Sundown Carpenter (Adagio, Beyond Twilight, Darkology).