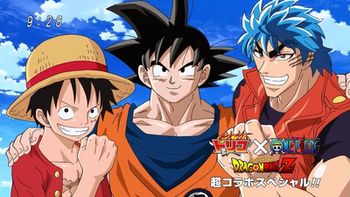 For food and justice!
Advertisement:

Dream 9: Super Collaboration Special!! is a one-hour anime special that aired in April 2013. It's a crossover between Dragon Ball, One Piece and Toriko.

The special is simple enough, IGO hosts a race with the prize being a rare, juicy, and absurdly expensive meat, natually this attracts characters from the aformentioned three series to come out and compete. It ultimately comes down to Goku, Luffy and Toriko in the end and, due to a tie, result in a three way battle.

After everything's said and done however, a danger looms for the heroes as a pufferfish-like creature attacks, stealing the strength of its victims and growing bigger and stronger in the process. Thus forcing a team-up between the parties to take it down before a 30-minute limit passes, so they could cook it and feed it to its victims to save their lives.

Should be noted not the first time these series have crossed over. One Piece and Dragon Ball have done so in the manga only special, Cross Epoch and Toriko has done at least three with One Piece before this, one manga special and two anime episodes.

Though Funimation has the rights to all three series, no dub was ever released in English.