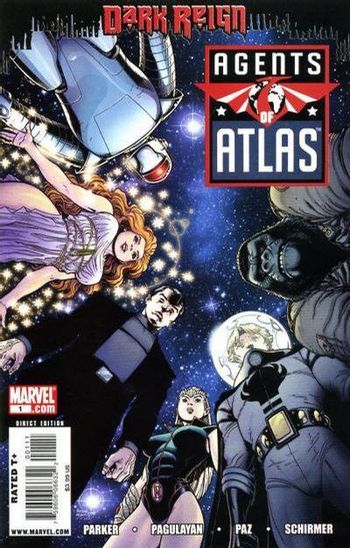 "The Spy. The Spaceman. The Siren. The Mermaid. The Robot. The Gorilla."
Advertisement:

Back in the 1970s, Marvel Comics published What If? #9, which asked "What If The Avengers Had Fought Evil During The 1950s?", bringing together a team of Marvel's Golden Age heroes to rescue a kidnapped President Eisenhower. Uniquely for that title, it was declared that this story arc had happened in the main Marvel Universe, and the team had indeed existed briefly. Then, decades later, the time travel plot of Avengers Forever altered history, causing the team not to have existed after all.

The set-up: In 1958, FBI agent Jimmy Woo was tasked with recruiting a team of heroes to rescue President Eisenhower, who had been kidnapped by evil mastermind the Yellow Claw. Jimmy recruited Ken Hale, the immortal Gorilla Man; M-11, the enigmatic Human Robot; Venus, the goddess of love; and Bob Grayson, the superhero Marvel Boy. Following the success of their first mission, the so-called "G-Men" stayed together for the next six months — before being abruptly shut down on orders from higher up. The team members disbanded, going their own ways.

Five decades later, Jimmy Woo, now a sub-director in SHIELD, led a mission to uncover the mysterious Atlas Foundation, but things went badly wrong; all of Jimmy's team-mates were killed, and Jimmy himself was left badly burned, and in a coma.

Jimmy's old team from the 1950s reunited to save Jimmy's life — and to discover how far the Atlas Foundation's reach extended. In the process, they rejuvenated Jimmy, brought sea queen Namora back from the dead, and took on the Foundation's many agents, eventually confronting its secret masters.

Again, that pretty much seemed to be it for the Agents, although they made a couple of other appearances elsewhere in the Marvel Universe.

Then in mid-2008 came the news that the Agents would be getting their own ongoing series, kicking off in February 2009. Cue much Squee from the Agents' fans — and a certain amount of cynicism, noting what usually happens with new series. This fate was semi-averted: the series wrapped up with #11, had a two-issue crossover with the X-Men, was installed in The Incredible Hercules as a backup, got relaunched, then got cancelled again

, with Parker calling quits at issue #5. There was also a three-issue miniseries for both Gorilla Man and the Uranian, and a one-shot for Namora.

Greg Pak introduced a "New" Agents of Atlas in 2019, in a miniseries tying in with War of the Realms. This roster consists entirely of Asian or Asian-American superheroes, with Jimmy Woo, Amadeus Cho, Shang-Chi, and Silk teaming up with White Fox and newcomers Aero, Sword Master, and Wave. Luna Snow, Crescent, and Io also made the leap from Marvel Future Fight to comics. The War of the Realms miniseries was followed a couple of months afterwards with another mini, featuring the once-new Agents in the main story by Greg Pak, and the original Agents in a one-part backup by Jeff Parker. Once this ended, the 2020 sequel to Atlantis Attacks teamed up all of the Agents for the first time.

While there hasn't been a live-action adaptation of this series to date, Randall Park appears as Jimmy Woo in the Marvel Cinematic Universe, making his debut in 2018's Ant-Man and the Wasp. Various businesses named Atlas have also appeared (for instance, across the hall from the Nelson & Murdock offices in Daredevil), and it's nice to think they're fronts for the Atlas.

Note: Atlas Comics was the name Marvel went by for most of the '50s. All of the characters in the original Agents of Atlas were created during the Atlas Comics period, before the Fantastic Four ushered in the modern Marvel Universe.