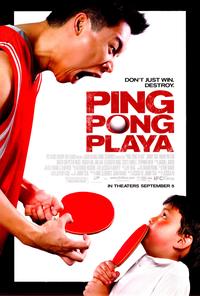 Ping Pong Playa is a 2007 comedy sports film from director Jessica Yu. It stars Jimmy Tsai as immature Christopher "C-Dub" Wang, an NBA wannabe who is forced to teach his mother's ping pong class at the Chinese school after she gets in a car crash. It also stars Khary Payton as C-Dub's best friend JP Money and Smith Cho in one of her earliest big roles.