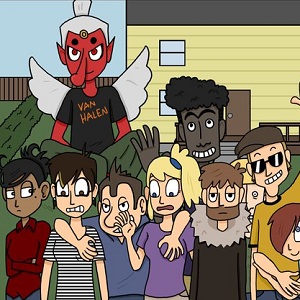 The gang's all here.
Froot Bütch

is a four panel, twice-weekly webcomic written by Brendan Albetski and drawn by Brendan Nicholas. It deals with the (largely) fictional characters of RJ, his best pal Davis, his ex-girlfriend Rose and their blonde friend Celia, who live together in an undefined space that when viewed from the outside appears as a suburban home. The four compose one of the arguably most unbalanced group of college students ever to have their activities documented. Long since jaded to the strangely convenient degree of wish fulfillment that exists in their world, the four rocket back and forth between unbelievable windfalls and hilarious catastrophes. For example, during the fiftieth update to the comic, RJ defied all odds and put on pants before noon, only to be struck by a bus and break his arm.

The four characters represent the four cardinal types that you'd expect to find in a college student's webcomic: RJ, the snarky one with a heart of gold, is your typical slacker: just trying to get through the day without dying, failing out or reminding Rose that she still technically pays his rent. Davis, the snarky one with a heart of coal, is the straight man, when he's not reaping gooseflesh with his ungodly scythe. But underneath his ever-present jacket lurks a dark past... a past of chain wallets... and trumpets. Rose is that girl that isn't the blonde one: you know, the strong female type, self-supporting and self-sufficient, who likes dyeing her hair and shadenfreüde as much as the next girl. Celia is the girl next door, or the girl next room in this case: an airhead, a lover of all things ponies, and a cold-blooded anarchist who can never go back to Mexico.

The plot lines are your standard fare: mainly one-shot events in their life with some longer, two to three comic arcs for special occasions, like Christmas or getting laid. The characters go about their daily lives: they feed the dog, they chat with their eerily similar doppelganger neighbors, they go shopping, and they clean up the messes left by that crazy foreign exchange student, Tengu Frank. Culture shock=many laughs.

The comic also features a small collection of secondary characters, who return semi-frequently to force the gang to deal with their problems and come to a deeper understanding of themselves. For example, Jeff Goldblum appears every now and again to teach RJ about the burden of public life, the meaning of friendship, and the word "no." This is where the comic really earns that "Embellished Webcomic" title, as the secondary characters tend to be anything from dream state canine body builders to the aforementioned Tengu out of water, Tengu Frank.

Instances of this series provide examples of: