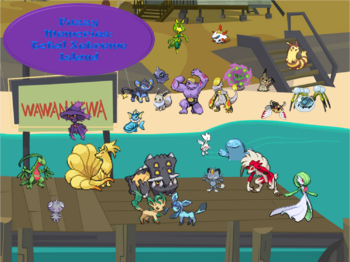 "So, who will fall under the pressure now that the cast truly knows the circumstances of this game? What friendships will form? Who shall become mortal enemies? And most importantly, who will be the first one to be eliminated from the game?! Find out next time, on Total! Drama! Island!"
— Amber

Fuzzy Memories is an ongoing series of SYOC Total Drama and Pokémon crossover fanfictions, created and written by Fuzzboy

. The series acts as a reimagining/"what if?" series, taking the contestants of both writer's previous and current works, and then placing them inside the original Total Drama as the contestants. The series' hosts are made up of Amber and Logan, and they're currently employing Tyson as the chef.

is the first season of the series, acting as a reimagining of Total Drama Island. The season takes twenty four teenagers and placing them on an abandoned island to compete for 100,000 poke, they are split up into two teams; The Brainy Baltoy and The Brawny Basculin, and are subsequently forced into competing against one another in challenges, that go on to test their relationships, push their strength to the absolute limit, emotionally break their morality, and place all kinds of barriers against their own sanity! This season introduces Ace, Alfred, Alia, Bari, Benson, Brick, Brooke, Chad, Cynthia, Doc, Freya, Gareth/Gein, Isabel, Juvia, Kaden, Kanaya, Mimi, Nazira, Nedrick, Quincy, Sage, Tempest, Violet, and Zetsu as new additions to the cast. The winner of the season was Nazira.

While more seasons were planned and attempted, the stories were rather anti-climatically canceled in late 2019.

It should be noted that this page and the character sheets are very much under construction and may not be completed for a long time at their current speed. Any and all assistance in editing the page will be greatly appreciated.