Characters from the various iterations of the first game of Game Arts' RPG series, Lunar, including (but not limited to): Lunar: The Silver Star and it's Updated Rereleases Lunar: Silver Star Story Complete, Lunar Legend and Lunar: Silver Star Harmony. All spoilers are unmarked. 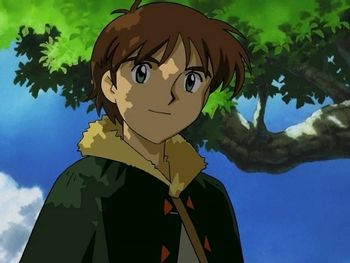 The main protagonist of Lunar: The Silver Star. An ambitious young boy from the village of Burg on Caldor Island, who dreams of becoming a hero just like his idol, Dragonmaster Dyne. 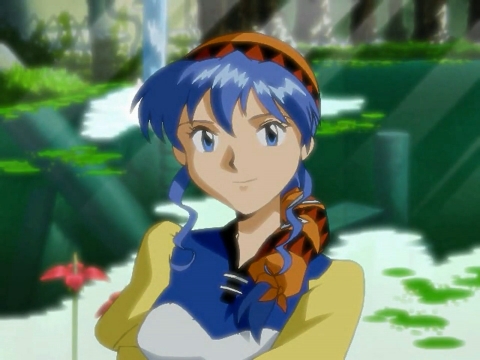 Alex's childhood friend, who has lived in Burg with him for as long as she can remember. She is well known for her extraordinary singing voice. 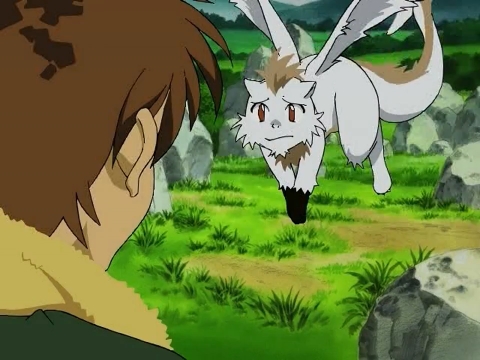 A baby white dragon that hangs around Alex. 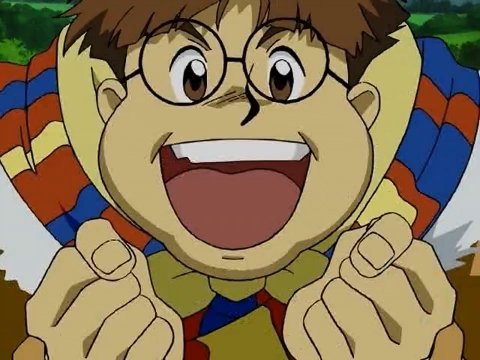 Another of Alex's childhood friends, though he's not quite as big on adventure as he is with dreams of making money. This doesn't sit well with his father, who is the village elder and hates the fact that Ramus always has his head in the clouds and never goes out and actually does anything. 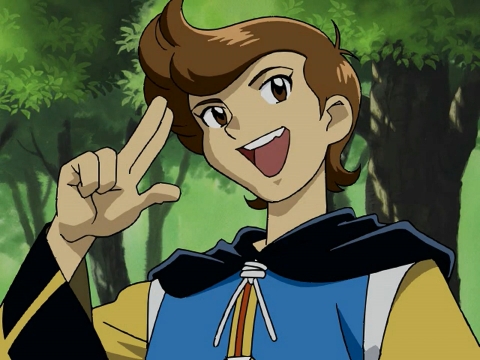 A student at the Vane magic academy. He believes himself to be one of the best, but his cocky attitude turns off his peers quite often. He is attracted to Mia, daughter of the guildmaster. 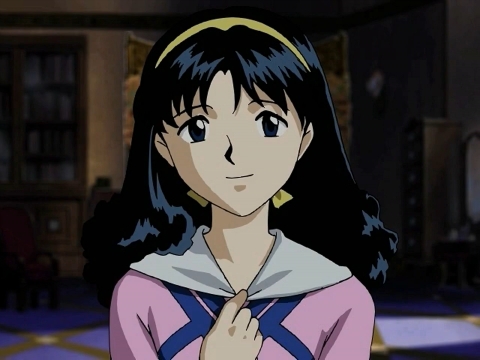 The shy daughter of Lemia Ausa. Nash has his eyes on her, but she doesn't tend to think of him as a love interest. 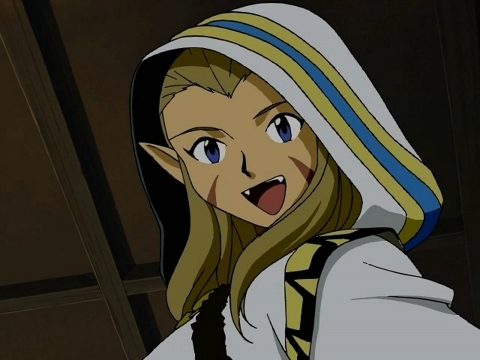 A priestess-in-training at the Shrine of Althena, but a bit more hot-headed than most. She and Kyle are in a Slap-Slap-Kiss relationship of sorts. 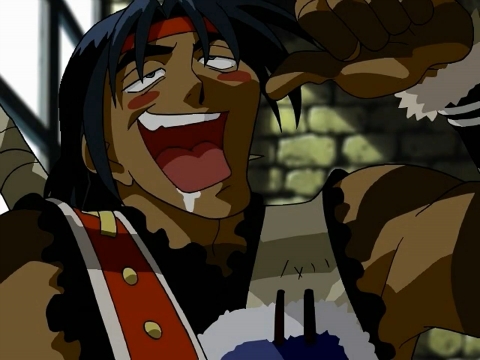 The leader of a gang of bandits that "protect" the Katarina-Marius border. Like his girlfriend Jessica, he's a bit of a hot-head.
Allies

The primary deity of Lunar. After the Blue Star was laid to waste by a battle between Althena and Zophar, the goddess gathered what was left of humanity and moved them to the Silver Star, a dead world until it was brought to life by Althena's power. Since then, she has been watching over this new world, which was named Lunar, with the help of her four dragons and her champion, the Dragonmaster.

The White Dragon of Althena, and the last surviving (and sane) member of the Dragon Tribe (until Ghaleon kills him). 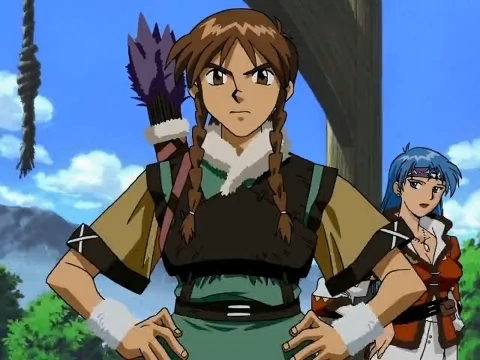 The chief of the Prairie Tribe. At first, he doesn't get along very well with Alex for having mercy on a liar. After Alex proves his skill as a warrior, however, he becomes an ally who is willing to offer his assistance whenever the party needs it.

Tempest's lover, rarely seen apart from him. The two are already planning on starting a family: Tempest wants a dozen kids, but Fresca would prefer a modest eight or nine...

A genius inventor who lives as a recluse atop a tower. Laike is one of his closest, or perhaps only, friends.
The Four Heroes
A four-person team of warriors who stood against the minions of the Vile Tribe to protect the goddess Althena long ago.

One of the original Dragonmasters and Alex's idol. Believed to have been killed. He is introduced to Alex as "Laike", a traveler whom Alex and company frequently meet during their journey. He is an extremely skilled swordsman, and saves Alex's bunch once or twice from a couple of sticky situations.

The mayor of the great city of Meribia, and probably one of the physically strongest people in the land. Father of Jessica de Alkirk.

The chief maiden of the Vane magic guild and mother of Mia Ausa. 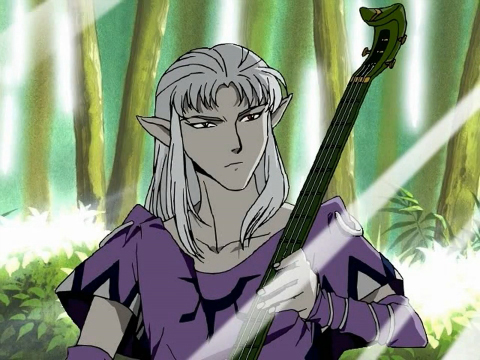 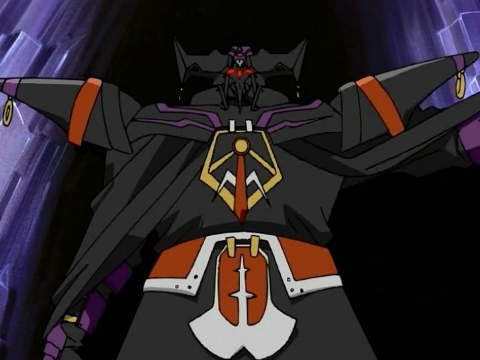 A powerful magician who once fought alongside Dyne, but now works in the Vane magic guild with Lemia. He is revealed to be the Magic Emperor, a man clad entirely in black armor who plans to rule Lunar.
The Vile Tribe 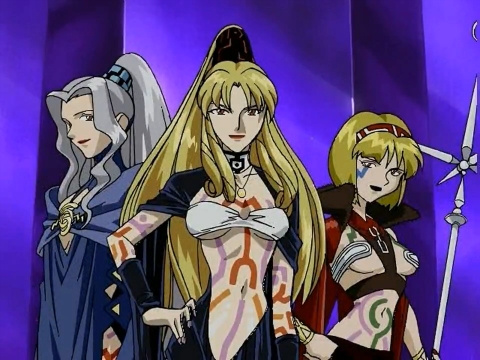 A powerful sorceress who leads the Vile Tribe and assists the Magic Emperor. She and her followers were banished to the Frontier for standing against Althena.

A remake-only character. A fortune-teller who works out of the Bazaar of the Bizarre in Meribia. She and her "sister" Phacia are actually refugees of the Vile Tribe, working directly under Xenobia.

Another remake character. She is a priestess at the Shrine of Althena on the Katarina region of the mainland. She, along with her "sister" Royce hold their jobs to disguise their true nature as members of the Vile Tribe.

An inventor working for the Magic Emperor. He is working the Vile Tribe to death to finish his masterwork, the Grindery.